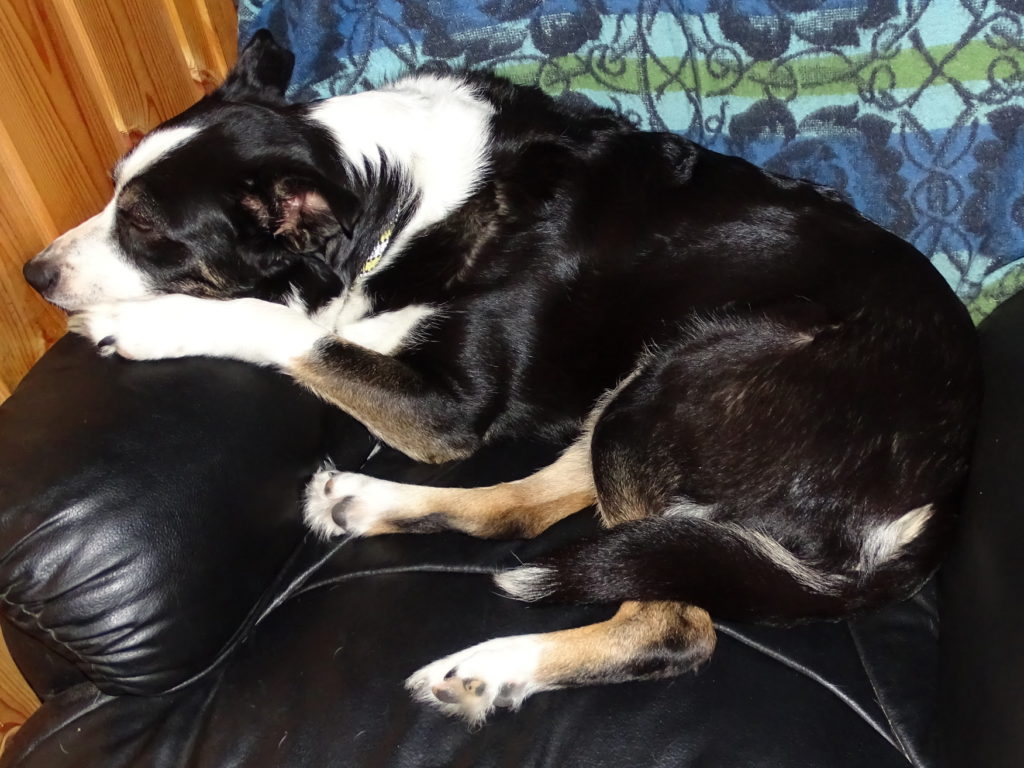 The Beast liked to sit quietly in the shadows of the corner, its smooth coat almost blending in with the white and grey pattern of the cold walls and hard floor. It seemed to have no eyes, but she stared it down anyway. Despite its small size, it had a gaping maw that opened wide with a rattle whenever one of her people brought a foot too near.

They fed it routinely, the foolish humans, especially the female, who was often silly and irresponsible. Not that she wanted the odd things they fed to it–they never smelled of food to her. Even her master, usually wise and responsible, failed to recognize the danger of the strange Beast. The female even named the stupid thing Justa.

Why did they let such a dangerous creature live in their potty room? How could they dare to squat so close to it?

Her job was to protect them. She kept her eye on the Beast whenever her people were near. But it even tricked them into moving it into the back corner, where she couldn’t be as effective a guard.

In those moments, the Beast would stand deceptively still, no sign of any movement. Then as their foot drew near, its mouth would snap open, ready to devour them. It loved to bite at fingers and hands, too, quietly opening just wide enough to bite off fingers or even swallow the hand whole.

It was the bane of her existence, the constant danger invading her home. She warned them, day in and day out, but they never listened. They just kept feeding the enemy….

It was the middle of night and Shawnee slept soundly in her preferred spot in her master’s chair in the living room. Suddenly alert, she recognized the distinctive clicks and rattles of the cabinet beside the sink opening and closing–a cabinet where Beast food is stored. Couldn’t a dog even sleep in peace in this house without someone feeding the Beast?

She raced out, through the food room, down past the door to the car and play area, into the potty room. Luckily her people had the sense to leave the potty room door open for her, even if they sometimes pushed it partly closed. The Beast would hurt no one on her watch.

Running full speed into the room, her feet slid on the slippery floor as she turned to face the Beast, positioning herself between it and her foolish mistress.

Mistress twirled the Beast-food stick in her ears. Odd habits these humans had. Then her human moved towards the Beast. Shawnee darted between the potty spot and the wall, snapping her teeth at the Beast. She’s my human! No one hurts my human. She banged it with her nose, then hit it again to be sure it got her message. It retreated slightly, scraping its bottom on the floor in its hurry. You are nothing beast. Get out of here!

“Shawnee, that’s enough.” Her mistress’s voice was commanding, so Shawnee retreated carefully, maintaining constant eye contact with the Beast and clapping her teeth a few more times to show it who’s in charge.

Mistress took a step forward, closer to the Beast. Shawnee’s muscles tightened, ready to leap in front of her.

Master would be unhappy with her if she ignored Mistress, so Shawnee stayed put, but her muscles quivered in readiness. As Mistress moved between her and the Beast, Shawnee pivoted her head constantly, stretching her neck, as she struggled to maintain eye contact and stare down the Beast. It would know her power, even if it had no eyes.

Mistress reached towards the Beast with her foot. Beast opened its maw wide with an angry bang.

Danger! Danger! Although everything in her ached to end the showdown, she knew it would disappoint Master if she moved. She clapped her teeth and put even more threat into her stare.

Mistress dropped the stick into the Beast’s gaping mouth. Its upper jaw clapped shut on the meal, luckily without Mistress’s hand having come too close–this time.

Mistress backed away from the Beast. “Shawnee, free.”

Shawnee sprang from her spot on the floor, slithering her wiry body between Mistress’s legs and the wall. She subdued the evil Beast with copious teeth claps and a few jabs from her nose. Satisfied she again kept Mistress from harm, Shawnee turned from the Beast. She tilted her head as she looked at Mistress.

Mistress sounded frustrated with Justa. Her body language was unhappy. Perhaps Mistress was finally understanding the threat the Beast posed and thinking of having Master kick it out?

With a final glare at the Beast, Shawnee followed Mistress from the potty room. She waited a moment in the hallway until she heard the door click safely shut.

Stopping at the gate to her humans’ nest, she checked that Master slept soundly. Mistress opened the gate and slipped through, but left Shawnee on the outside. She wished she could have a snuggle with Master under his comforter to celebrate her victory.

Finally Shawnee padded back to her master’s comfy chair in the living room, which at least smelled like him, and curled up. She’d need her sleep to be ready in the morning for another day of guard duty.

This story was originally written for a casual contest and is based on the real-life behavior of my husband’s dog Shawnee. She’s the one in the picture above.