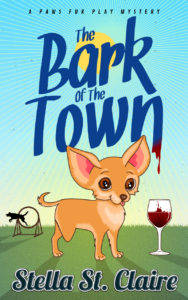 The Bark of the Town is a cozy mystery by Stella St. Claire that was released in early November. I read an ARC from NetGalley for the purposes of this review.

Cozy mysteries have been a staple of my reading diet for many years. My mother would collect cozies from a variety of sources, especially thrift shops, and both she and my grandmother would read them. Then my mother would tuck them into birthday and Christmas packages to me. Our attic has boxes and boxes of cozies and many were read multiple times because I lacked reading material in English. So this genre is one I’ve read and analyzed thoroughly in the past and have some very definite opinions on what does and doesn’t work for me as a reader.

This book opens with the murder scene. Some readers enjoy that, but I’m not one of them. I want to obtain my information as the sleuth does so I can pit myself against them in the race to figure out whodunnit. This scene doesn’t reveal the killer, which I do find happens occasionally and would completely ruin the book for me. If you’re like me and don’t want to see the murder at all, I recommend skipping the prologue and starting on chapter one, which is from the sleuth’s POV.

Once you’re past the prologue, the mystery is pretty solid. I’d expect the average reader to enjoy it. The pacing is appropriate to the genre and there are both clues and red herrings.

I haven’t read the earlier books on the series. I didn’t feel left out in terms of plot, but I think not knowing the characters and relationships contributed to them feeling flat to me. The author likely relied on depth established in the earlier books, leaving them feeling a bit more like cardboard to a new reader and keeping me from investing as much in the characters as I prefer. Someone who reads the entire series will likely have an extra layer of enjoyment and higher rating, as they’ll have more sense of the characters and investment in their relationships.

For me it passed the time and providing an enjoyable mental puzzle, but it doesn’t make me want to hound the author for more. But given the opportunity to read more, I would do so.

Additionally some aspects of the writing style contributed to my sense of distance, but these aspects are unlikely to register consciously on the average reader. Sometimes I really wish I were normal so I could just disconnect and enjoy without picking things to pieces so much.

Since I was reading an ARC that may have been created before final proofreading, etc., was completed, I ignored some trivial things that I expect were cleaned up prior to release.

Overall I give this book 3.5 stars.