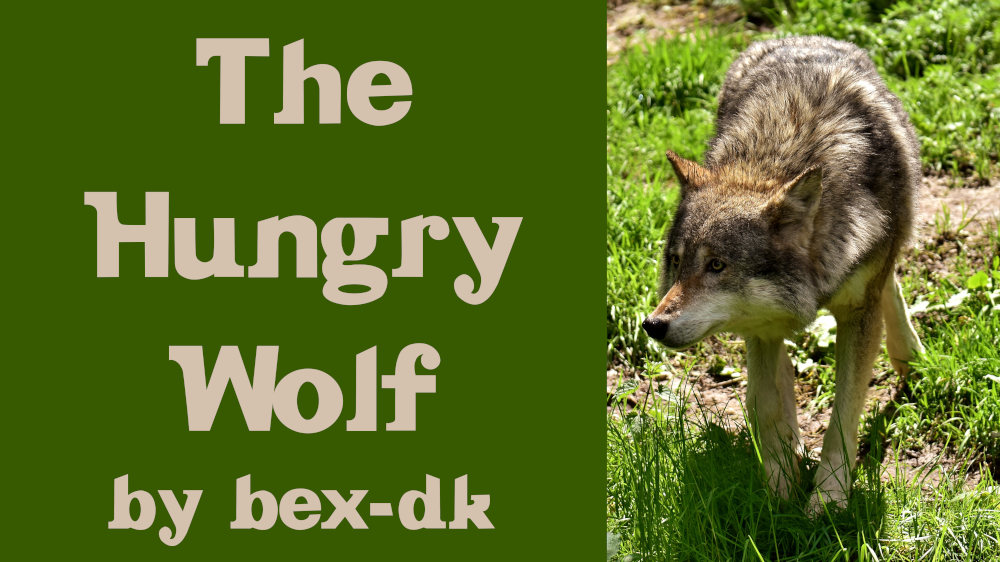 The only way to satisfy the hunger was to kill. Something else had to die–in his jaws–for him to eat. The trees looked down on him in judgement. Any creature that let him near risked its life. Even his own kind hated him.

The wolf paced back and forth in the woods near a well-traveled path. Leaves and twigs tickled his ribs where he brushed against the underbrush, and bits of his fur hung in the branches. His stomach growled. No matter how much he tried to ignore it, the hunger wouldn’t go away.

But he refused to kill something just to eat. Not since… He shook his head. When was that memory going to stop hurting? He hadn’t meant to eat the hare. His only friend. He wouldn’t have if his brother hadn’t tricked him. No more. The hunger might never abate, but he would not give in to it again.

That memory made his gut churn even more. He kicked at his flanks with first one hind paw then the other. His need for food was so strong that it gnawed at his innards–a raging beast that thought only of itself and would do anything to get what it wanted.

He failed every time he gave in to the need to kill. But he’d failed his pack by not helping with the hunts. They left him behind when they moved on to better territory. At first he tried to go along, but his brother, now the pack leader, had stopped him. “You’re nothing but a burden to us.”

He tried to beg forgiveness. He promised to do better. But when he tried to follow, his brother bared his teeth and growled. So he surrendered, rolling onto his back and flashing the pink skin of his stomach. They were ready to kill him, so he simply watched as they abandoned him. Now he was alone.

In the many months since they left, he’d tried everything to limit the carnage. Grass and berries barely made a difference. He’d even chewed rotting logs a few times, hoping the grubs would be enough. But nothing satisfied the beast except bloody meat and bones.

Nausea from the memory of his last hunt added to the discomfort, but the thought also made the beast rage more. What choice did he have but to kill? It didn’t help that these woods had been overhunted, so he had no chance of scavenging someone else’s leftovers. Not that there was anyone else to scavenge from anyway.

He stalked over to a patch of grass and began nipping bits off. Why hadn’t he been born a deer? Life would be so much easier and the herd would have had no reason to reject him.

The scent of prey floated on the air, and the hunger surged. He slipped through the bushes towards the source.

The beast within demanded to be fed. He swished his tail, trying to silence it.

Girls rarely came alone into the forest, especially not ones as nice as Red Riding Hood. He’d been alone such a long time. Could she be a possible friend? Struggling to maintain control, he stepped out of the bushes to stand beside the path a short distance in front of her.

“Hello!” Polite was the best he could manage, as the hunger clouded his mind. She smelled so good.

She didn’t run from him, but seemed intent upon a task as she skipped closer.

“Where are you going, little girl?” Saliva pooled in his mouth and dripped from his jowls. The scent was overwhelming this close to her.

“I am going to visit my grandmother who is sick and alone.” She stopped and lifted the checkered cloth from her basket. “I’m taking her cakes Mother and I baked.”

Cakes. What a delicacy.

He should eat both her and the cakes–now.

No! She was a chance at friendship.

He backed away a step as his stomach rumbled like thunder. “A bouquet of fresh wild flowers would brighten your grandmother‘s cottage. There’s a small clearing over there with nice blooms.” He pointed into the woods.

“Thank you.” Red Riding Hood smiled and wandered off the path.

The wolf rushed into the underbrush. The hunger compelled him. Drooling profusely, he loped straight to Grandmother‘s cottage. The beast demanded a meal.

Grandmother was alone and weak. It was almost her time anyway. Wouldn’t it be merciful to end her misery?

How would Red Riding Hood feel to find Grandmother’s cottage empty when she arrived? The girl’s so sweet.

The starving beast took over his body, savage and strong. It knocked on the
door.

“Who is it?” The voice was female, weak and scratchy with age.

His mouth opened and It answered, sounding a bit like a little girl. “Little Red Riding Hood. I have brought you some cakes and wine.”

The wolf burst in, helpless to stop the hunger. It grabbed her immediately. She didn’t even fight.

Starving and crazed, he swallowed her whole.

He tried again to exert control over his body. Despite the feast, It refused to let go.

A soft knock reached his ears. He sobbed as the beast jumped in the bed and did Its best to imitate the grandmother. “Who’s there?”

“Little Red Riding Hood.” Her voice was soft and gentle.

“Come in, my dear, ” It answered. The wolf attempted desperately to stop the beastly hunger, but It refused to allow him to rise and flee.

The beast grabbed her and swallowed her whole.

At last It had enough. The hunger subsided.

The wolf cried, mourning their deaths, despising his weakness. He stayed in the cottage, trying to come to terms with the murders he had so savagely committed.

Someone approached. The footsteps were heavy like boots and a smell of male sweat and fresh-cut wood wafted into the cottage.

The woodcutter was known for stopping by to check on the old woman. Would he have his axe?

Dare he wish? The wolf couldn’t stand himself any longer. Could this end the struggle?

The woodcutter knocked on the door.

The wolf remained still, wishing for his end.

This story was previously published on my Steem blog.

One Reply to “The Hungry Wolf”